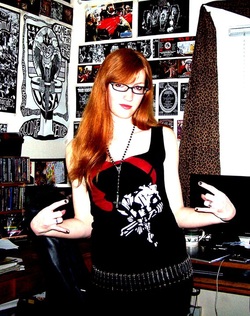 Hailing from San Diego, my first exploration of art was in conjunction with a multimedia academy at Clairemont High School that focused in film making. From there, I went on to Mesa Community college where I started a series of paintings based on horror movies which heavily influence me.
My art teachers have pushed me to examine the obsession I have with the macabre, and I have found that there are so many reasons. Since antiquity skeletons, corpses, and the dancing dead were portrayed in art as a reminder that death was always on its way, but to LIVE while still alive. My tendency to draw the undead stems from this, because I believe that in our modern culture, zombies serve a similar purpose. Now that life is more pampered and death not as imminent, the real fear has become that we will turn into mindless beings with nothing left but the carnal urge to consume life. Beyond that are my optimistic tendencies, and my fascination with the joining of seemingly opposite but complementary themes. My sense of humor alongside my obsession with the macabre can come out quite twisted or sometimes ironic. I hope in my art you will see my effort to find the beauty in the revolting, the comedy in the tragedy, the light in the darkness.

I received my BFA in Illustration at California State Long Beach, where I honed my skills with the help and support from the wonderful staff.  I learned many new skills and mediums while there, notably Medical Illustration, Printmaking, and finally tackling my greatest foe, Watercolors.  I have since been working as a full time Graphic Designer at a sign shop, while doing freelance work on the side.  With my main past time involving listening to heavy music and supporting underground bands, I have done my fair share of art for the metal community.  Obviously taste for the macabre still has not subsided (and I'm sure never will!), although it has been balanced out with a healthy dose of magical unicorns.  In 2009 I created a ridiculously uni-corny board game called Unicornatopia, which soon became much more with the help of my roommates and fellow artists Angela Abeyti and Mia Johnson.  Together we do conventions, art shows, and collaborative art to spread the love of unicorns